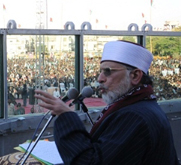 Leader of Tehreek-i-Minhaj-ul-Quran Dr Tahirul Qadri has said that the parliament of the people of Pakistan being held in Islamabad on 14th January would bring a public revolution in the country. He said that the flag of the revolution for bringing happiness to the faces of oppressed people was raised in Lahore at the Minar-i-Pakistan on 23rd December and the practical struggle has started from Karachi. He said this while addressing a huge public gathering in the Jinnah Ground in Azizabad.
He said, “World’s largest Tehreer Square will come into being in Islamabad on 14th January. But this gathering would be completely peaceful and there would be no violence at all. No bullet will be fired and the gathering of 4 million people would demonstrate that the people of Pakistan are peace-loving.”
Dr Qadri said that the coming together of the city of the Quaid-i-Azam and the city of Allama Iqbal for restoring the rights of the 180 million oppressed and downtrodden people and for eliminating feudalism and exploitation in order to bring a real democracy in the country is an indication of help from Allah.
“The flag has been raised for freeing 180 million people of Pakistan. The journey for obtaining their rights has begun. We want to end injustice. We want to eliminate hunger”
“Pakistan is endowed with immense resources but the poor people are forced to sell their children because of oppressive poverty.”
Dr Qadri said that dreams become realities when ideologies get strong arguments and when a mission gets selfless workers. “Time has come turn the dreams of poor people in realities.”
Dr Qadri said, “I had extended invitation to all political parties for joining hands for the revolution but only Altaf Hussain supported the voice for the rights of the poor people and for eliminating exploitation.”
“The manner in which the MQM has extended support has made it clear that it is not the party of Karachi alone. They have proved that they are working for the welfare of entire Pakistan.”
“Altaf Hussain has been making struggle for the oppressed and downtrodden people for the past 32 years. I have also been fighting this battle in Pakistan and other parts of the world.”
Dr Qadri said that he has come to Nine Zero to thank Altaf Hussain for his support for restoring the true spirit of democracy, bringing a just and equitable system, and revitalizing the social and spiritual values of Islam, for establishing peace and order in the country, for eliminating corruption and sending truly representative people in the elected houses.
He said on oath that there was no foreign power or agency behind his agenda. He made it clear that he does not desire any office. He categorically refuted that he wanted to become the caretaker prime minister.
“I want to make it clear that we want the supremacy of the constitution in Pakistan. We want to make Pakistan a truly welfare state and restore the true spirit of democracy. We want the rule of law.”
“The constitution of Pakistan says that the authority is to be exercised by the people of Pakistan and it is a sacred trust but the rulers have trampled it under their feet.”
He asked the people if the rulers were exercising the authority as a sacred trust. The people waved their hands and said, “No”.
Speaking about the changes in the electoral reforms, Dr Qadri said that he would announce the detail agenda in a few days. But he said that only those should be allowed to contest the elections who fulfil the legal and constitutional requirements under article 62 and 63.
“We are not against politics. We are struggling for clean politics. We are only against the corrupt political culture. Our politics is aimed at restoring the confidence of the people on the democratic system”
“Merit has been trampled and justice has been paralyzed. We want to give the right of leading an honourable life to the people of Pakistan. We want to create employment opportunities.”
“We want people to have faith in the same democratic system. We want them to see the ray of hope. More than 60 per cent people have become disappointed with the electoral process and they do not cast vote in elections. It is not possible to restore their confidence without introducing reforms in the electoral system.”
Dr Qadri said that the armed forces of Pakistan also comprise the people of Pakistan. “If merit can be strictly followed in the armed forces, why can’t it be implemented in civilian department as well?”
Reminiscing about his stay in Karachi he said that Karachi used to be a peaceful city. “Who has robbed the peace of Karachi? People are living in a state of fear and they are forced to pay extortion.”
In the end Dr Qadri thanked for strong support given by Mr Altaf Hussain and declared that all future decisions would be taken with consultation.