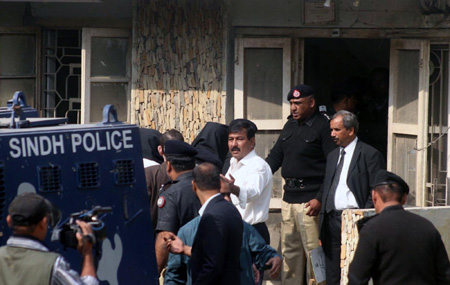 Khan was gunned down on December 25, 2012 in Karachi and following the incidents, Chief Justice of Pakistan Iftikhar Muhammad Chaudhry had taken a suo motu notice and ordered the inspector general of police of Sindh to produce the accused before the court.

Judge Ghulam Mustafa Memon of the ATC-III sent them to prison on physical remand till 17 January.

Moreover, the court also issued non-bailable arrest warrant against Shahrukh Jatoi, who is on run since the Khan’s murder, and also against his father Sikandar Jatoi. The court also ordered investigation officer to produce them before the court for remand as early as possible.

SHC grants status quo on LEW affectees petition: The SHC on Monday restrained the official respondents from demolishing the houses of petitioners in connection with Lyari Expressway (LEW) project.

The petitioner Muhammad Hanif and 31 others through their counsel Shaukat Ali Shaikh submitted that they were settled in Liaqatabad, and KMC and KDA had also registered their plots and granted them registered lease from the year 1966 and later on.

They stated that respondents were trying to demolish their houses for Lyari Expressway project without paying any compensation.

They submitted that respondents had started acquisition work in year 2002 and one side of road was completed in the year 2006. They said that now once again work on Lyari Expressway had started after the delay of six years and respondents were paying same compensation, which was decided in 2006, which according to them, is violation of the acquisition rules.

They said that respondents had still not paid compensation to those householders whose property was acquired for the project in year 2006 and was demolished without paying compensation.

Headed by Justice Irfan Sadaat Khan, the division bench, issued notice to the respondents and also directed them that status quo be maintained. The court put off the hearing till January 31. (DailyTimes)

← The journey for obtaining the rights of 180 million people has started from Karachi: Dr Tahir ul Qadri
Muttahida MPA Manzar Imam gunned down in Karachi →