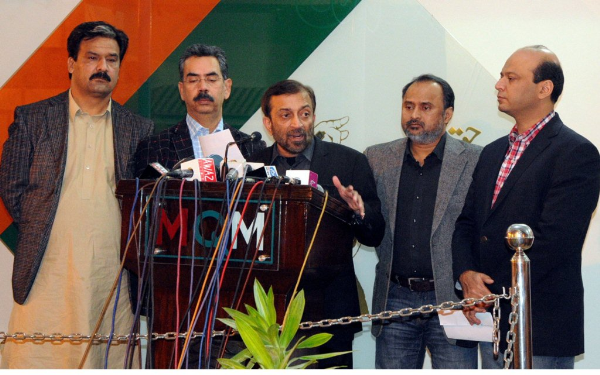 A joint meeting of the Co-ordination Committee of Muttahida Quami Movement (MQM) was held in London and Pakistan. The meeting discussed in detail the invitation extended by the Tehreek-i-Minhaj-ul-Quran for participating in its long march being held in Islamabad on 14th January for introducing revolutionary reforms in the electoral system of the country and for eliminating the feudal system and corruption from the country. This was stated by the Deputy Convener of the Co-ordination Committee Dr Farooq Sattar in a press briefing at Nine Zero.
Dr Sattar said, “After discussing all aspects in detail the Co-ordination Committee decided to take active part in the long march being held in Islamabad on 14thJanuary for abolishing the decaying feudal system, eliminating corruption and use of money in politics, restoring the rights of the people belonging to the poor and middle classes in the politics of the country and establishing a just and equitable system in the country. The meeting decided that hundreds of thousands of the MQM workers would take part in the long march along with Minhaj-ul-Quran for these noble objectives.”
Mr Altaf Hussain has endorsed the decision of the Co-ordination Committee and appealed to the MQM workers and haq parast people to participate in the long march on the 14th January in Islamabad.
Dr Sattar said that Mr Altaf Hussain has always stated that he wants to change the outmoded system of the country. He has said that he wants a real revolution to usher in the country without bothering about the name or the flag. “As the programme presented by Dr Qadri is the same for which Mr Hussain has been relentlessly struggling for the past 33 years, hence the MQM has decided to extend full support for this noble cause. We are with Dr Qadri for achieving these objectives.”
“People of Pakistan are well aware that Mr Hussain wants to establish a truly democratic system in the country. He wishes to establish a middle class order by eliminating the feudal system, unrestrained capitalism, and the hereditary control of a handful of families on the politics.”
“The MQM did not raise the mere slogan of the middle class order. It actually sent the educated and qualified people from the poor and middle classes to the assemblies and brought a revolution as far as the urban areas of Sindh are concerned.”
“We wanted to spread this revolution throughout the country but our path was obstructed by state repression. Thousands of the MQM workers were mercilessly killed. Even the brother and nephew of Mr Hussain were martyred when he refused to bow down. We were not disappointed by these injustices and continued our struggle.”
“It is the outcome of our struggle that the message of the MQM is spreading at a quick pace in the Punjab, Balochistan, Khyber Pakhtunkhwa, Gilgit-Baltistan, Azad Kashmir and tribal areas of the country. There is no area in the country where the admirers of Altaf Hussain are not present.”
“We firmly believe that one day our struggle will be successful and the outdated political system will be changed.”
Other members of the Co-ordination Committee present at the briefing included Saleem Shahzad, Waseem Aftab, Wasay Jalil and Gulfaraz Khan Khattak.