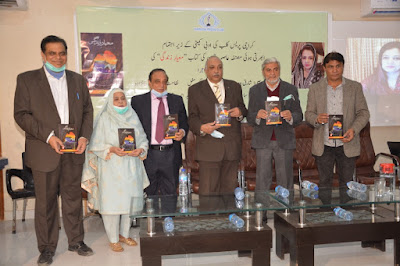 By Abdul Qadir Qureshi
(Pakistan News & Features Services)
The Literary Committee of the Karachi Press Club, one of the iconic institutions of the country, organized the launching ceremony of Asma Hassans recently published book Mayar-e-Zindagi at its own purpose-built auditorium on December 24.
Shariq Vohra, President, Karachi Chamber of Commerce and Industry (KCCI), was the chief guest in the book launch ceremony which was presided over by Jahangir Moghul, Charter President, Rotary Club of Karachi Darakhshan (RCKD). Author Asma Hassan joined the proceedings from Lahore via video link.
The speakers at the ceremony included Iqbal Saleh Muhammad, Managing Director, Paramount, Books, Khawaja Naveed Ahmed, a former judge of the Sindh High Court, Nasreen Masood, a veteran social worker, Imtiaz Khan Faran, President, KPC and A H Khanzada, Secretary, Literacy Committee, KPC. The ceremony began with the recitation of Holy Quran by Zia-ur-Rahman. 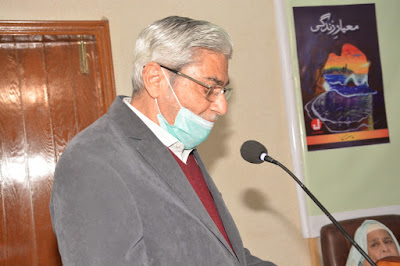 Iqbal Saleh Muhammad, the first speaker of the evening, highlighted the various aspects of the book and he described it as a worthy publication which could be expected to do well in the market despite the challenging ground realities.

Being a doyen of publishing and bookselling in Pakistan, he didnt mince words in sharing that putting together a book was an arduous task and only those having gone through this exercise knew it exactly how tough it was to produce a high quality book like Mayar-e-Zindagi.
Khawaja Naveed Ahmed, an eminent lawyer, lived upto his reputation of entertaining the audience as he shared his observations about the book in his typically lighter vein. 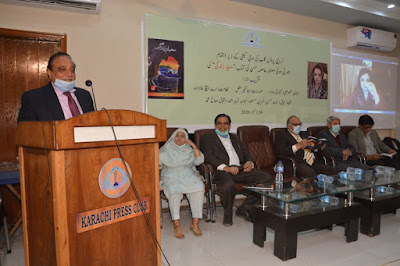 He appreciated the contents of the book and he was particularly pleased with the ability of the author to have written crisp and precise chapters, conveying big messages within matter of a few pages which was commendable as the majority of people, in his opinion, were not keen on reading voluminous publications.

Nasreen Masood, an enthusiastic social worker, who has also penned the foreword to the book, confessed to have become a great fan of the writing of Asma Hassan.
She writers really well and I get touched by his style. She has chosen wonderful topics and she has done justice with them. Its really great to find her maiden book having created waves and I feel equally proud to have contributed its foreword, she observed. 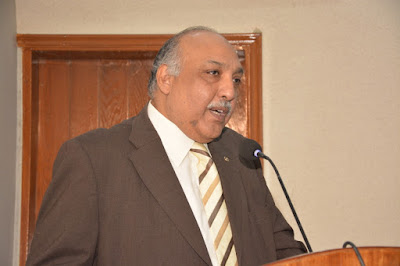 Jahangir Moghul, one of the most prominent social personalities of the country, was equally appreciative of the work of Asma Hassan and he expected its subsequent editions in future.

The subjects covered in the book are of immense interest to the readers in general. I will urge Asma Hassan to continue writing such brilliant articles and also consider the possibilities of bringing out new editions with fresh articles on a yearly basis, he advised.
Chief guest Shariq Vohra showered author Amra Hassan with praise for having made a sensational debut with Mayar-e-Zindagi, a book he had ordered for immediately after the book was put on sale.

Although I am not getting much time these days for fuelling my passion for reading, due to my preoccupations as the KCCI President, Mayar-e-Zindagi is one of the few books I have been able to read recently. Hats off to the team having produced and published such a wonderful book, he complimented. 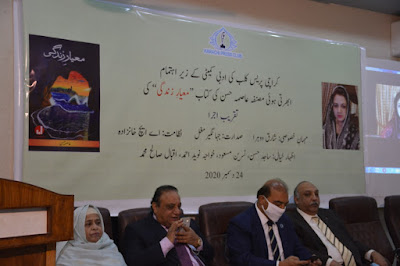 The KPC President, Imtiaz Khan Faran, and the KPC Literary Committee Secretary, A H Khanzada, were also loud and clear in praising Mayar-e-Zindagi for its content and production.
Author Asma Hassans five-minute speech, via video link, was listened with pin drop silence as she mesmerized the audience with her thoughts and selection of words. 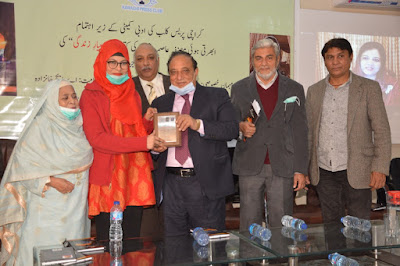 She narrated the story of her dream coming true with the publication and launching of Mayar-e-Zindagi in the most challenging of circumstances with COVID-19 having wreaked havoc.

Emerging artist Beenish Khan was recognized and praised for her painting published on the title of Mayar-e-Zindagi with Khawaja Naveed Ahmed in particular commending her effort. In was in the fitness of things that he presented her the shield of appreciation on the occasion.
Shields were also presented to the dignitaries and the officials of KPC and RCKD.