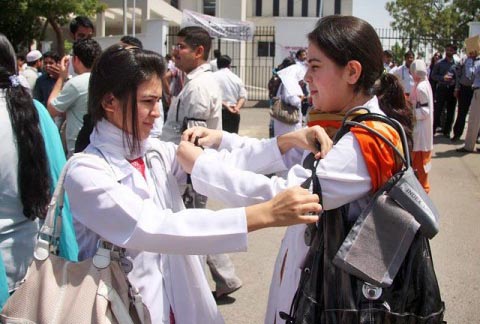 In a joint press conference, the leaders of PMA and PIMA warned the government that if unjustified scheme of evening classes was not dropped, the doctors’ fraternity would knock the doors of the court.

Speaking on the occasion, Dr Azhar said that the medics of the country would not tolerate any unprofessional and unethical medical education as this kind of medical education did not exist anywhere in the world.

He said that the PMDC, violating the ethics, had again started to organize the evening classes at Shaheed Benazir Bhutto Medical University, Larkana, adding that the initiating of evening classes will cause injustice to the medical students and the patients.

resentation at the 118th meeting of PMDC, which was to be held on April, 3, 2011, but the PMAPMA called an emergent press conference on March 18, 2011 and opposed the idea. He said the PMA once again called a press conference on April 1, 2011 and called for the help from civil society to come forward and make an effort with the PMA to stop this exercise.

As a result, he said, the voice chancellor of LUMHS declined to give the presentation in this regard. Dr Azhar said that the issue once again came to surface in June 2011. According to the plan, he said, the 119th meeting was called on July 5, 2011 and the PMA again called a press conference on August 7, 2011 to challenge the managers of the PMDC to refrain from going to adopt this resolution and the PMA threatened to go for litigation against the PMDC in this regard and the plan was shelved.

Speaking on the occasion, Dr Misbahul Aziz said that every private medical college was required to have at least 500-bed hospital but there were only 15 to 16 per cent private colleges abiding the rules of the medical education.

He claimed that anyone could open a medical college just after giving Rs60 million on account of bribe to the department concerned.

Expressing deep concern over PMDC’s performance, Dr SM Qaisar Sajjad said that the Council should perform as autonomous body, while part time and ad-hoc systems should immediately be removed. He said that names of all medical colleges were not on the official website of PCMD, which shows there is some malpractice in the council, he said

Dr Idrees Adhi said that the grave side effects of the products of evening medical colleges will ultimately be suffered by the people of the this country.

“We as a stake holder have very serious concern about this developing situation, as we think that the medical education in the country, which is already in crisis, will further lose its charm and dignity. At this particular time and moment there is no single evening medical college around the globe,” he added.

The leaders of the both the associations resolved that the PMA, the PIMA and all sister organizations of the medical community were united on this issue and they will challenge the idea of opening of evening medical colleges in the court.

The doctors’ fraternity urged the Chief Justice of Pakistan to take suo-motu action against the act of the authorities concerned so that the idea of evening medical colleges could be shelved. Other members of PMA and PIMA were also present on the occasion. (Nation)