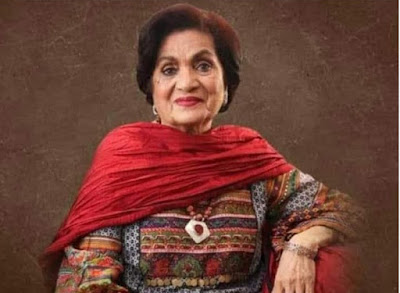 Haseena Moin, the legendary Pakistani dramatist and playwright, passed away in her home city of Karachi on March 25. She was known to be battling cancer for the past few years but the cause of her death was not disclosed immediately. She was 79.
She had passionately participated in the Pakistan Day event at the Arts Council of Pakistan (ACP) in Karachi on March 23 which turned out to be her last public appearance. Only a day earlier, she got her first dose of the COVID-19 vaccine at the ACPs vaccination centre where she hailed the professionalism of the staff present on the occasion.
Having written several plays for stage, radio and television which gained international repute, she had become a legend in her own lifetime. She had also penned a congratulatory message for Jumbo Karachi Guide which was published in the Words of Encouragement section of its third edition.

Haseena Moin had immortalized herself by writing numerous blockbuster dramas like Ankahi, Tanhaiyaan’, Kiran Kahani, Dhoop Kinaray, Aahat, Uncle Urfi, Shehzori, Kohar, Des Pardes, Pal Do Pal, Aansoo, Kasak, Parchaiyan and Parosi.
Born at Kanpur, India, on November 20, 1941, she and received her early education at her ancestral place. She migrated to Karachi in the 1950s where she graduated from the Government College for Women and earned a Master of Arts in History from the University of Karachi in 1963.
She earned the distinction of writing Pakistan’s first original script ‘Kiran Kahani’ which was aired in the early 1970s. The dramas written by her were instrumental in adding value to the Pakistan Television Corporation (PTV) and some of the characters of his plays have remained famous even after half a century.
Hailed and recognized at various reputed forums, she was a worthy recipient of the prestigious Pride of Performance award for her services towards performing arts in Pakistan. She will be remembered for her works for a long time to come as the social websites were flooded with condolences soon after the announcement of her death.