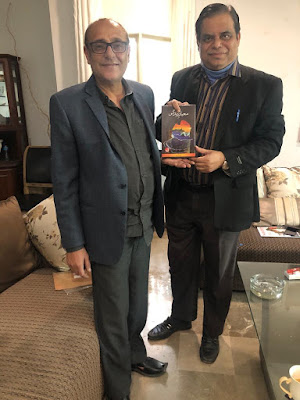 Versatile actor Sajid Hasan has felt devastated and heartbroken with the demise of the legendary playwright and dramatist, Haseena Moin, on March 25.
Words fail me. In deep mourning. Please dont call me to say anything, was his instant response on twitter soon after the tragic news was broken.
Haseena Apa was family to me. I couldnt go to her funeral. But I cant stop my tears knowing I will not meet her again. She had a humungous influence over my entire career. I never knew what power she had as a writer when I joined Dhoop Kinaray, Sajid Hasan observed after controlling his emotions.
Most people only know me through that one play. She was also like most artistes a very innocent and extremely humble soul. Never did I hear her raise her voice or be angry or be derogatory to any individual. She was always well dressed, always smiling. The last I met her was at the Arts Council, during elections. She was tired but still participated. Never did she complain about the cancer she suffered from for years and years. She was always lively. She was the best friend anyone could ever have, he narrated.
After the bypass I was waiting for my chest wounds to heal so that I could call her and we would talk. Like all good Pakistani she was always worried about what was happening to the world of writing that she adored but all her worries ended now, Sajid added.
Life wont be the same without Haseena Apa now but death spares no one. With her we have lost perhaps the most amazing miraculous writer. I am forever her mourner and will miss her till my end, he declared.
Although his first major drama series was Khaleej, he became a star and a household name with his epic performance in Haseena Moins blockbuster play Dhoop Kinaray in which he had played a comedic role.