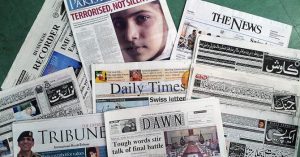 IMAGINE silent media prodigies, role models for the young nation and behind fame of many a celebrity!Compliment Mufti Saheb, the then InCharge News, Pakistan Observer”: a captivating and overwhelming role model of piety, honesty, simplicity and sacrifice and remarkable news acumen and expertise.Attribute Anil Datta: a gem of a round-the-clock positively thinking and investigative reporting for “THE NEWS”,a trulydie-hard patriotic Pakistani, struggling 40 years for survival with peanuts of a pay, breathing his last not long ago.Legendary Shahida Kazi, first English language female reporter at DAWN, one-time News Editor at PTV, media faculty until age 70, urging students to read newspapers for knowledge and grooming. Ablend of business journalism at DAWN, leading the cause of human rights, busy round-the-clock as President of the Karachi Press Club, taking personal pains for human values was Late Sabihuddin Ghausi.

Applaud less-heard journalists instrumental role, especially in Islamabad and in the Punjab, by being at the helm of their respective news desks, silently and sacrificially contributing to the news credibility, public appeal and promotion of their newspapers as KhalidAkhtar of the then The Muslim, Tariq Warsi of Nawa-i-Waqt, Hasan Musanna of The Nation, Mariana Baber, free-lance, Late Syed Fasih Iqbal, Chief Editor, Baluchistan Times and Zamana Quetta, former President of APNS and CPNE and a former senator, reflect touching humility and sheer simplicity, remarkable commitment to journalism. Able, noble, humble and gentle role of grooming key media reporting celebrities are living bygones of such early media pioneers asMukhtar Zaman and Salim Alvi from the news desk of the Associated Press of Pakistan(APP).

Remember from Lahore Late Ayesha Haroon from The Nation and Nasim Ahmed, the then Editor, Pakistan Times for many a media, social and humanitarian cause.MashaAllah alert and alive to current media demands prominent ones are Syed Talat Husain carrying deep inside a model of love and respect for his mother and Nasim Zehra for core human values and humanity, Manzar Saheb, Editor The Leader, Karachishowing how Sultan Ahmed and Nizam Siddiqi, amid his warm-hearted presence that the former contributed editorials to “The Leader” even when he was overwhelmingly involved with DAWN and the latter continued to cherish “The Leader” even when he pioneered JANGs reporting.Talking more of DAWN, stories of humble, illustrious and life-sacrificing reporters include those of Late Maisoon Husein and Late Salman Husain.

Attribute Akbar Shahbaz, with top credentials in broadcasting, captivating voice an architect of Mast FM 103 to be intrigued and reduced to a part-time RJ; Tajdar Adil, celebrity-maker PTV producer of such public shows as Neelam Ghar and Moin Akhtar show and producing public pulsating patriotic songs,Nargis Hashmi, aSeraiki girl, traveling to Karachi for her Master’s in International Relations from Karachi University, taken by PTV finally Head “PTV World”, role model of dignity and integrity for many an aspiring female of the nation. Matloob-ur-Rauf and Basheer Zaidi Aseer, Controllers Current Affairs, PTV and PBC respectively, models in grace and dignity, symbols of current affairs acumen, experts in time and priorities management, icons in guiding, sharing and helping. Indeed, there will be some others.

The writer, a senior faculty in media management with devoted journalistic background,contributes to media on national and international affairs.