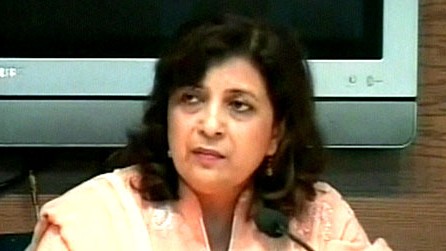 She was a member of National Assembly from Sindh returned on a reserved seat for women after the February 18, 2008 general elections.

Fauzia Wahab has been appointed as the new central Information Secretary of the Pakistan Peoples Party in place of Ms. Sherry Rehman on March 18, 2009 by Co-Chairman, Mr. Asif Ali Zardari.

Fauzia was born in 1956 and is the eldest of four children. She married in 1978 to Wahab Siddiqui, a journalist and TV anchorman in political talk shows in later years on Pakistan Television. For the next fourteen years, she was a housewife and had four children. Fauzia Wahab acted in Haseena Moin’s drama serial ‘Kohar’ as the cousin of the hero played by then famous model Junaid Butt. The Drama was aired in 1991-92 and directed by M Zaheer Khan. In February 1993, Wahab Siddiqui died of a massive heart attack and her life took a new turn. She then re-married prominent cardiologist Dr Athar Hussein.On 27th May 2012, she, in serious condition admitted in a hospital at Karachi and died on 17th june 2012.