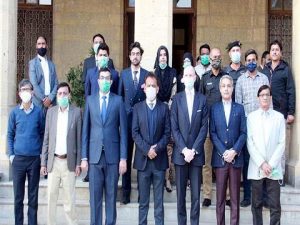 British Deputy High Commissioner Mr Mike Nithavriankis has said that youth aspirants for civil service should expand their knowledge so that they could pass CSS examination and serve their country. “Civil service is a great profession and the one could succeed through commitment. The candidate should not get disappointed in case of non selection but keep striving for the success. Students are facing hardships due to COVID-19 pandemic. Karachi is a big Islamic city and economical hub of Pakistan. England had introduced civil service system. England and Pakistan are working together in different sectors. 150 English companies are working in Pakistan,” the Deputy High Commissioner passed these remarks while addressing at CSS corner at Frere Hall. Additional Commissioner Karachi Dr Waqas Roshan, Director General Parks Taha Saleem, Senior Director Culture and Sports Syed Khursheed Shah, Sultan Siddiqui and other officers of Karachi Metropolitan Corporation were also present on the occasion. The British Deputy High Commissioner said that he came to Frere Hall for the first time and it was honour for him to meet the participants of CSS course. He said that choosing historical building to establish the CSS corner is a great step adding that he was impressed the way aspirants are taking interest in the course. Mr Mike Nithariankis said that Karachi is financial capital and business hub as well as offices of all big British companies are situated in the city. He said that due to timely efforts of local administration, COVID-19 couldn’t done the damage in Karachi as it did in other parts of the world. The British Deputy High Commissioner said that he had served in embassies in different countries and felt extremely good in Pakistan. He said there still some space for expanding cooperation between England and Pakistan for matter of mutual interest, adding that steps are being taken in this regard. Talking to students, Mr Mike Nithavriankis said that a civil servant should have qualities of respecting both seniors and juniors. He said that a civil servant should work with courage and treat everyone indiscriminately. He said that circumstances like COVID-19 are critical for a civil servant who should take this a challenge rather a job. He was of the view that Pakistan is an important country in England’s foreign policy. There was lack of coordination England and Pakistan in the past but now it is being restored. The British Deputy High Commissioner said that England Cricket Team would be visiting Pakistan next year while they are also working to take more English companies to Pakistan to expand trade between the two countries. Later, Mr Mike Nithavriankis also answered queries of the students and appreciated them for their keen interest in the course. Earlier, Administrator and Commissioner Karachi Iftikhar Shallwani welcomed the British Deputy High Commissioner and apprised him about all facilities being provided to the students. Shallwani said that CSS is the toughest examination as 10,000 aspirants take part in the exam and get appointment on high ranked posts on merit. The Administrator said that CSS exam is the door to bureaucracy for the youth and they are provided the opportunity free of cost to get prepared for CSS exam at the corner. He said that English language is the most essential in this examination and special focus is on English at the corner. Shallwani said that Frere Hall is totally being restored to its original position and library at the Hall is also being uplifted. The Administrator also presented a shield and traditional Sindhi cap and Ajrak to the British Deputy High Commissioner who also visited different parts of the Frere Hall.