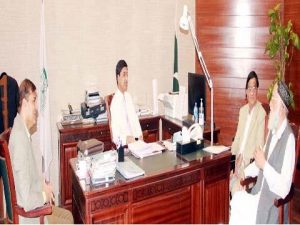 Administrator Karachi Laeeq Ahmed said that social and welfare organizations have done excellent job in education and health sectors and got the people’s confidence through their positive activities. Talking to Al-Mustafa Welfare Society head and former Federal Minister Haji Haneef Tayyab here at KMC building, the Administrator said that Karachi Metropolitan Corporation is taking all-out measures to provide maximum civic facilities to the people. Ahmed said that initially the incumbent infrastructure is being made intact before initiating new projects. Management committees comprising of representatives of welfare and social organizations as well as KMC are also being formed to look after the affairs of graveyards. He was of the view that metropolitan cities face environmental pollution thats why plantation campaign is going to be started from 15th February under which around 70,000 saplings would be planted. Proper mechanism for taking care of planted trees would also be made. The Administrator asked Al-Mustafa Welfare Society to cooperate with the KMC in plantation campaign. Social and welfare organizations have assured to support KMC in the works for betterment of Karachi which is a welcoming sign. Al-Mustafa Welfare Society head Haji Haneef Tayyab said that they were providing education at English medium schools to around 600 orphan children. He said that -Al Mustafa Welfare Society has established “Mera Ghar” for orphan children while “Gosha-e- Ameer Hamza” is for senior citizens and “Gosha-e- Khatoon-e-Jannat” is for women. He added that Al Mustafa Welfare Society is also operating hospitals and clinics in different parts of the city where large numbers of people come. Haji Haneef Tayyab also hailed the KMC in its measures and said that they wanted to support the KMC in plantation campaign.