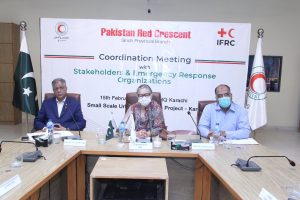 The Sindh branch of the Pakistan Red Crescent Society (PRCS) on Monday organized a coordination meeting on urban resilience at the Emergency Operation Centre of PRCS-Sindh, HIlal-e-Ahmer House Karachi. All the relevant stakeholders and Humanitarian organizations participated in the meeting with the aim of building working relationships to enhance the capacities of the Emergency Response Force (ERF) and strengthen the mechanism of emergency response in the city.
The event was presided by the Chairman PRCS-Sindh Mrs. Shahnaz S. Hamid and attended by the representatives of Edhi Welfare Organization, Chhipa Welfare Association, Saylani Welfare Trust, Aman Foundation, Provincial Disaster Management Authority (PDMA), Institute of Oceanography Pakistan, Pakistan Boy Scouts Association, Federal and Sindh Civil Defense Training School, Pakistan Meteorological Department, Social Welfare Sindh, Fire Protection Association of Pakistan (FPAP), 1299 Rescue Service, KMC Fire Department and Office of Commissioner Karachi.
Chairman Mrs. Shahnaz said that PRCS is a statutory body established under an act of parliament, works throughout the country as an auxiliary to government organization. It is a leading humanitarian organization offers its services as per its mandate for alleviating sufferings of the most vulnerable affected by natural or man-made disasters, she stated. Chairman further said that preparing communities to cope up with disasters to reduce the risks & hazards and building the capacities of youth during peacetime are integral parts of PRCS intervention. PRCS-Sindh has established an Emergency Response Force (ERF) in the province especially responds in urban disasters and emergencies with trained volunteers network in Karachi and other cities, said Chairman. She further said that all welfare organizations, government departments, rescue and response agencies in Karachi must work together to deal with disasters and provide more effective assistance to those affected.
Honorary General Secretary Tariq Moen welcomed all participants and said that this meeting primarily aims to increase interaction between emergency response organizations and concerned government departments for future collaboration.
The Provincial Secretary Kanwar Waseem said that PRCS-Sindh is working with the International Federation of Red Cross and Red Crescent (IFRC) for more than a decade on Disaster Risk Reduction (DRR) Projects. The IFRC has vast experience to serve the most vulnerable people and has made valuable efforts in recent years to support the development of more resilient communities in urban areas worldwide. The Urban Resilience Hub at IFRC Asia Pacific Regional Office has initiated a pilot project in Karachi to establish a coordination network with relevant stakeholders/Humanitarian actors including government, civil society organizations (CSOs), NGOs/INGOs, institutional donors, think tanks, and networks working on Emergency Response in Karachi. The Provincial Secretary also announced that PRCS-Sindh is going to launch a mobile application on the Disaster Management System to establish a nexus among all stakeholders in case of emergency and to disseminate information about the incident.
Stakeholders also appreciated the initiative of PRCS and vowed to provide assistance in any way that they could, and will work together. Appreciating the activities of Pakistan Red Crescent, Chief Fire Officer of Karachi Metropolitan Corporation Mubeen Ahmed said that Pakistan Red Crescent has expertise in dealing with disasters effectively. “The PRCS deserves the highest accolade for further strengthening the mechanism of emergency response in the city,” said Syed Muhammad Shayyan Shah, Deputy Director of PDMA-Sindh.