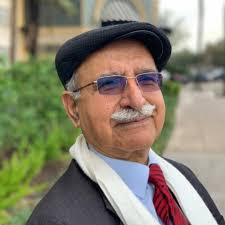 By Abdul Qadir Qureshi
(Pakistan News & Features Services)
Today humanity is straddling on the cross, at the crossroads of unfolding expanses of sciences and humanities, increasingly mutilating the very complexion of human being and ‘being human, the Houston-based Prof Justice Shahzado Shaikh remarked in his address on the World Speech Day.
Today, some of the biggest challenges to the very survival of humanity emerge mainly from the man’s own making, that is through reasoning and research, for example, the artificial intelligence, and the genetics, with the immense potential to re-engineer the behavioral and physical frame of mankind, he remarked humanity at crossroads being the theme of his speech.
Critical thinkers like Henry Kissinger, Eric Schmidt, and Daniel Huttenlocher, are apprehending even end of enlightenment. Henry Kissinger goes on further to warn that Artificial Intelligence will fundamentally alter human consciousness, he added.
The assent of advancement without laws of regulating social gravity has the potential features to catapult mankind into virtual culture, tending further into virtual civilization to virtual life. That’s it! It could mean the termination of human evolution into a non-human virtual entity, not a humane living being, the Professor opined.
Fiction of today may be science of tomorrow! In the 21st century, mankind is facing these existential challenges along with the sufferings of all sorts from moral decadence, wars, poverty, hunger, to disease, and so on. The worst of all is the accelerating process of dehumanization devoring the human being to the state of being humane is dissolving, which otherwise is supposed to hold human beings together in its compassionate cast, he stated.
Humanity is threatened all around, over the globe, whether it be territorial, trade or finance policies of great powers, or the state of human rights, in different countries where the humanity has been forgotten in the name of national interest, power politics and insatiable greed of all kinds, Prof Justice Shahzado Shaikh felt.
Without losing further time, the mankind has to make conscious decisions on preferences for humanity over race, peace over war, compassion over callousness, affluence along with humanity, distinct from animality, modernity along with human morality, and so on, he concluded.