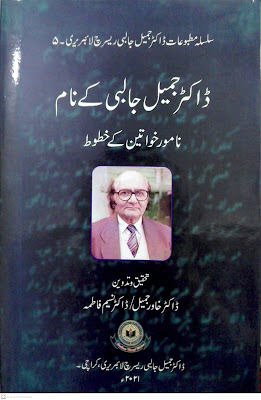 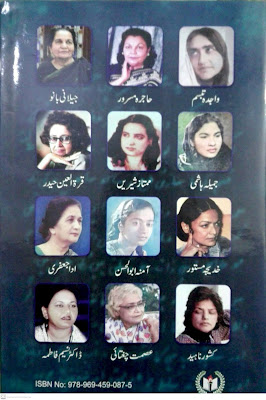 der, Kishwar Naheed, Muazzama Tabassum, Mumtaz Shirin, Nasim Fatima, Nasima Binte Siraj, Wajida Tabassum and Hajira Masroor are the 38 eminent women whose letters to Dr Jamil Jalibi have been published in the fifth book of the series brought out by the Dr Jamil Jalibi Research Library.
The book has been dedicated to Dr Jamil Jalibi’s daughter Sumaira Jamil, son-in-law Muhammad Abdullah and their children Shafaq Abdullah, Bilal Abdullah, Farooq Abdullah and Rafay Abdullah.
Co-authors Prof Dr Nasim Fatima and Dr Khawar Jamil have written a detailed foreword of the book.
“A lot of books have been written on Dr Jamil Jalibi but none of them have covered the aspects of his letter-writing and his correspondence with various learned ladies. The basic reason was the inaccessibility to the heaps of letters which were there to be seen,” they noted.
“We have carried out a research and we have found out that he had exchanged letters with no less than 200 ladies, some of whom were famous and a few of them were not so much known,” they disclosed.
“The highest number of letters (286) were from Jamila Hashmi, follow by Qurrat-ul-Ain Haider (124) and Nasim Fatima (70). Among others he had regular correspondence with Jilani Bano, Razia Fasih Ahmed, Shakila Akhtar, Sultana Bakhsh, Amber Hashmi, Mumtaz Shirin, Wajida Tabassum and Hajra Masroor,” they revealed.