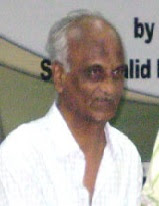 Pakistans greatest-ever broadcaster whose voice was admired and recognized globally, Azeem Sarwar, passed away in Karachi, after briefly illness, on September 12. According to the family sources, he was hospitalized for the past one week due to kidney ailments. He was 79.
Having worked at the Associated Press of Pakistan (APP), the national news agency of the country, in the same era when Azeem Sarwar was excelling in his pursuits at the Pakistan Broadcasting Corporation (PBC) it was both an honor as well as pleasure to interact with him at various official meetings as both our organizations worked jointly in the umbrella of the Ministry of Information & Broadcasting.
He remained among the most illustrious contemporaries of mine, who was a household name not only in the every nook of corner of our country but he also enjoyed massive fan following outside of Pakistan.
His voice remained so distinct and impactful all along. I fondly recall people from different walks of life, waiting impatiently, holding transistors in their hands, to listen to his various programmes having been aired from time to time.
In my estimation, he has been the greatest ever all-round broadcaster to be produced by Pakistan. No wonder, he was also the longest serving broadcaster in the history of Pakistan. Starting his career as an announcer as a raw teenager at Radio Pakistan Quetta way back in 1958 he retired from service in 2002 at the age of 60 in capacity of Deputy Controller but continued doing radio programmes until recently which meant a broadcasting career of 64 years which must be a record of sorts.
After having won numerous awards during his illustrious career, he thoroughly deserved the highest national recognition in his lifetime which and the concerned authorities could now do it posthumously.