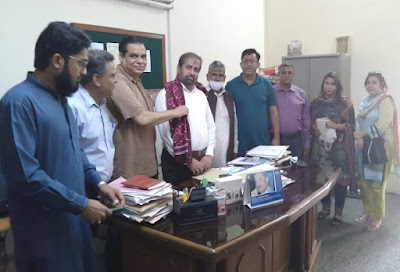 A delegation of the National Library Association (NLA), headed by its President, Muzaffar Ali Shah, called on Prof Dr Farhat Hussain, the newly appointed chairperson of the University of Karachis Department of Library & Information Science at the campus on September 6.
The NLA Advisor, Syed Khalid Mahmood, along with its Secretary General, Anwar Hussain, were also a part of the delegation whose other members present on the occasion included Nasir Mustafa, Hira Yaseen, Samina Aziz, Nasir Nayab and Abu Bakar Ghauri.
The meeting was held at the departments Classification & Cataloguing Lab in which matters of mutual interest were discussed at length. It was decided in principle that the NLA would be a part of the 65th anniversary celebrations of the department, planned to be held during the next few months.
The NLA officials volunteered to support the proposed anniversary function of the department as a token of appreciation for their Alma Mater which has produced numerous stalwarts of the profession over the past 65 years. 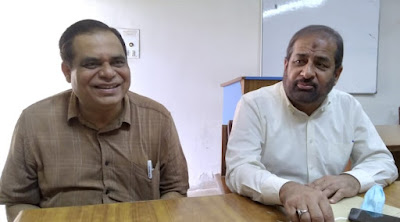 Our department, established in 1956, has had the tradition of celebrating its landmark anniversaries. Having done it in our 25th, 50th and 60th years, we are eager to do it again in the 65th year of our existence. The engagement of NLA will obviously add value to the occasion, Prof Dr Farhat Hussain observed.

Its very gladdening to find the NLA, still in its formative phase, displaying so much energy and enthusiasm for the cause of the profession which is reflected by the continued programmes which they have succeeded in organizing with moderate resources, he complimented.
The idea of holding National Library Day on any chosen day of the year was also brainstormed and it was agreed to work on it to come to a conclusion in near future.
Finally, on behalf of the NLA, its Advisor, Syed Khalid Mahmood, presented the traditional Sindhi Ajrak to the chairperson of the University of Karachis Department of Library & Information Science.