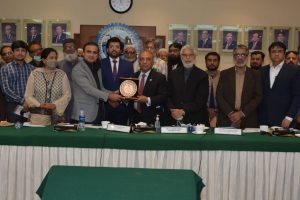 Deputy Commissioner Central Dr. M.B. Raja Dharejo has said that the e-tax payment facility, which was introduced in District Central as pilot project, has proved successful hence it will now be expanded to all districts of Karachi within the next one-and-a-half month.
Speaking at a meeting during his visit to the Karachi Chamber of Commerce & Industry (KCCI), DC Central categorically stated that no new tax or tariff has been introduced in the e-tax payment facility which was an online local tax collection system in which all the taxation rates have been kept intact while the collection under Municipal Charges was not something new which was being charged exactly as per relevant laws.
President KCCI M. Shariq Vohra, Senior Vice President Saqib Goodluck, Vice President Shamsul Islam Khan, Chairman of KCCIs Special Committee for Small Traders Majeed Memon and a large number of small traders mostly from District Central attended the meeting.
DC Central pointed out that the e-tax payment facility has been introduced with an intention to minimize human interaction which was resulting in harassing the shopkeepers to demand bribe. With this initiative, the manual tax collection has been transformed into digital collection which would surely ease the process and save shopkeepers from harassment and corruption as the human interaction factor has been completely eliminated, he said, adding that the shopkeepers can easily assess their tax dues and generate challan themselves for payments either on a computer or even on a smart phone and the process was very easy.
He was of the view that as the fund generated from Municipal Charges were being transferred directly to DC Offices account hence, these funds will be returned to the shopkeepers in shape of municipal development work in their respective markets.
Speaking on the occasion, President KCCI Shariq Vohra stressed the need to minimize the hardships being faced by small traders who play a very important role in the economic development of the country. The local administration will have to take effective steps to strictly deal with the harassment by officials from DC office who fearlessly walk into any shop to negotiate taxes and demand bribes, he added.
He said that the idea of introducing e-tax payment facility was demanded initially by Karachi Chamber long time ago for not just Karachi city but for the rest of the province and all over the country. Finally, the Sindh government has implemented it which the business community warmly welcomes as it would help in dealing with the menace of corruption. However, the Sindh government and the local administration must ensure that the already perturbed shopkeepers were not being overburdened by imposing any new tax and the rates of existing taxes have to be kept lower as the small traders and shopkeepers were still facing serious crises due to coronavirus pandemic.
Chairman of KCCIs Special Committee for Small Traders Majeed Memon stated that the shopkeepers and small traders have been regularly paying all their taxes to the federal and provincial government despite a very challenging environment triggered by COVID-19 pandemic but these shopkeepers should not be overburdened by imposing new taxes. Although the administration claims that Municipal Charges was not a new tax, but we neither heard of it nor paid it throughout our lifetime, he added.
He underscored that as the small traders and shopkeepers were already battling hard for survival in an extraordinary situation triggered by the pandemic, the local administration must scrap the Municipal Charges until the pandemic is completely over and the business environment returns of normalcy whereas the Municipal Charges also have to be lowered as the existing rate was too high and many shopkeepers, who are already paying taxes under renewal of trade license and taxes for displaying signboards etc., cannot afford further burden of municipal taxes.
The meeting participants pointed out although e-tax payment facility has been introduced to discourage human interaction but to date, the corrupt officials of DC office continue to visit numerous markets to harass the shopkeepers. They further questioned that why they should pay municipal charges when no municipal related work was being carried out at the markets where all the cleanliness and garbage disposal work was being done by the shopkeepers themselves.