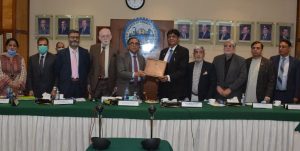 Managing Director of State Bank of Pakistans Banking Services Corporation Muhammad Ashraf Khan has said that digitalization of foreign exchange, which started in March 2020, has been expanded from 8 to 13 banks and majority of the banks will be processing 88 percent of foreign exchange digitally by the end of February 2021 and 98 percent by April whereas the banks will completely discontinue paper-based submissions after June 2021.
MD SBP-BSC, while speaking at a meeting during his visit to the Karachi Chamber of Commerce & Industry (KCCI) on Monday, added that the initiative to digitalize foreign exchange operation was taken to create ease for the business community by completely eradicating the paperwork and expediting the overall process which has successfully been implemented by many banks.
Head of Foreign Exchange Operations Department SBP Shakeel Muhammad Paracha, Director Exchange Policy Department SBP Arshad Mehmood Bhatti, Vice President KCCI Shamsul Islam Khan, Chairman of KCCIs Banking & Insurance Subcommittee Qazi Zahid Hussain, Advisor Banking & Insurance Subcommittee Ateeq ur Rehman and others attended the meeting.
MD SBP-BSC further stated that everything has been transferred from manual to digital processing and the customers have the freedom to get online anytime either from their home or office to apply for delivery of remittances without any paperwork while the customers will receive updates and objections (If any) about his transaction on his/ her registered email address.
While assuring full support and cooperation, he stressed that the business and industrial community must come forward to adopt the digital mode for foreign exchange in which the customers can get registered themselves and track progress of case while relevant bank staff is also intimated about the progress and history of all the transactions is also maintained in a paperless environment.
Vice President KCCI Shamsul Islam Khan, in his remarks, pointed that the State Bank, in any economy, plays the role of a heart in the economic development of the country by ensuring smooth circulation of funds and it was heartening to see that the State Bank has also been responsibly playing its role in an efficient manner which can be gauged from improved economic indicators particularly exports and remittances which have witnessed substantial growth.
However, the growth in remittances being witnessed nowadays may not last long hence, the State Bank needs to come up with some kind of the effective policy or incentive package which encourages Non-Resident Pakistanis (NRPs) to invest in numerous sectors of the economy. Encouraging such investments by NRPs would prove would not only help in dealing with economic crises but would also promote industrialization and create abundant employment opportunities on long term, he added.
He also stressed the need to take concrete measures for effectively dealing with the menace of smuggling which terribly hinders the legal trade and causes losses to the national exchequer. In this regard, he particularly suggested to establish Common Industrial Zone or Common Industrial Park near Pak-Iran border where all Custom Duties/ taxes should be kept at minimum level while this zone should be fully equipped with required infrastructure and the gas and electricity supplies should be provided by Iran which would surely bring down the cost of doing business due to cheaper electricity and gas tariffs that would attract a large number of industrialists to set up their units and warehouses in this particular zone.

← Municipal Charges not new, being collected exactly as per law: DC Central
JTECH 2021 on February 26, 27 →