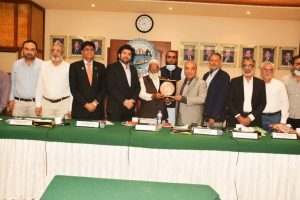 President Karachi Chamber of Commerce & Industry (KCCI) M. Shariq Vohra has assured members of KISMA delegation that the Karachi Chamber, in KCCIs Proposals for Federal Budget 2021-22, will certainly be highlighting the issues pertaining to higher Regulatory Duty, Customs Duty & Additional Customs Duty, Further Sales Tax, CNIC condition and other critical taxation issues being faced not only by the Iron & Steel sector but also by many other sectors of the economy so that the government could pay attention to these pressing issues and accordingly announce relief in the next budget. We are well aware of all these issues and the impact on your businesses hence, we will fully support all your demands and make all-out efforts to get these issues amicably resolved, he added.
Shariq Vohra gave the assurance to members of a delegation from Karachi Iron & Steel Merchants Association (KISMA) during a meeting held at KCCI. Chairman KISMA Haji Ghulam Muhammad led the KISMA delegation while Senior Vice President KCCI Saqib Goodluck, Vice President KCCI Shamsul Islam Khan, Former Chairman KISMA Shamoon Baqir Ali and others attended the meeting.
Shariq Vohra stated that the Karachi Chamber has always opposed the CNIC condition, particularly after the outbreak of COVID-19 pandemic as it was terribly affecting all the businesses. KCCI fully supports KISMAs demand to waive three percent further tax as registered persons should not be penalized for the failure of unregistered persons.
He stressed that the government will have to focus on providing a tax-friendly and business-friendly environment by facilitating the business community and devising policies after consultation instead of penalizing and squeezing registered persons and imposing anti-business policies. It is high time that the business community is provided an enabling environment in which taxpayers must be fully facilitated which is the only way to bring the unregistered persons into the tax net otherwise they will continue to shy away from the taxation system, he added.
Senior Vice President Saqib Goodluck pointed out that most of the trade associations have been highlighting numerous taxation issues but an important taxation issue i.e., the Additional Custom Duty on various imported goods, which started from 1 percent and has been gradually raised to 2 percent, 4 percent and even 7 percent with different slabs, was not being highlighted. The ACD along with higher custom duties, regulatory duties and valuation rulings etc., pave way for smuggling hence, all such higher taxes and duties have to be brought down while the unjust taxes like ACD should be discontinued, he added.
Vice President KCCI Shamsul Islam Khan, in his remarks, pointed out that the entire taxation system was full of flaws and depends mostly on indirect taxes as 62 percent indirect taxes and only 38 percent direct taxes were being collected which needs to be rectified. The system needs to be improved in such a manner that it automatically brings the entire population into the tax net instead of pursuing unregistered persons by demanding their CNIC which has proven to be a futile exercise. It is a crime to seek CNIC as it can easily be misused by anyone, he added.
KISMA delegation, while expressing deep concerns on three percent Further Tax and the CNIC condition, stressed that this unjust tax should be immediately abolished as it increases the cost of doing business for registered persons and penalizes the already overburdened registered taxpayers in the form of more taxes on behalf of unregistered persons as by no means, the unregistered persons would bear the extra three percent tax while the CNIC condition means loss of business and it must be withdrawn because, after looking into the hardships being faced by registered taxpayers, nobody was intending to give their CNIC. There was not a single country around the world where taxpayers were being burdened more and more due to misdeeds of non-taxpayers except Pakistan.
They further mentioned that FBRs policy of making all Sales Tax registered persons/entities its Withholding Agents without their consent was intolerable as it raises the cost of doing business. Hence, FBR will have to revisit its policies and lessen the burden on registered persons by taking those steps that lead to reducing the cost of doing business.
They stressed that the FBR will have to focus on creating such a favorable environment in which people should themselves get registered as presently, excessive due to unnecessary demands, excessive requirements, frequent audit and other tactics being used to squeeze the existing taxpayers, the unregistered persons were discouraged from getting enrolled in the taxation system.
KISMA delegation proposed that Sales Tax returns should be made half yearly or quarterly while withholding requirements for registered persons should be removed and no audits of registered persons for sales tax, income tax or withholding taxes should be conducted with a view to reduce the hardships.

← Motiwala irked over Traffic Management Plan for PSL6, demands not to block Stadium Road
Municipal Charges not new, being collected exactly as per law: DC Central →