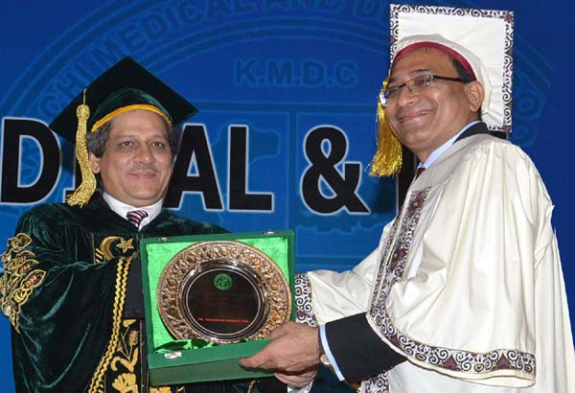 The Governor of Sindh also announced an additional grant of Rs400million for development works of Phase-III that includes establishing an IT and Video Conferencing Lab, an auditorium, an administrative block and a ten storey building in KMDC. Degrees were awarded to 212 Doctors in MBBS and BDS whereas 13 Doctors Gold Medals and Rs25000 cash reward. Earlier presenting the inaugural speech KMC Administrator Muhammad Hussain Syed congratulated the successful degree holders of college and thanked Chief Guest Governor of Sindh Dr. Ishrat-ul-Ebad Khan and guest of honor provincial health minister Dr. Sagheer Ahmed for attending the convocation. Administrator Karachi said in today’s world having a mere MBBS or BDS is not just sufficient and like other professionals they must continue updating their knowledge and better understanding of existing and new diseases. He said medical education in Pakistan is given an important consideration therefore we should enhance our capabilities and capacities in professional developments we should also work together formulating a policy to ensure good quality and ethical practices of doctors. He said as patron-in-chief of KMDC I m well aware of the problems faced by faculty members, staff and others and we are taking special measures on a priority basis for the resolution of all issues under the under the leadership and guidance of Governor of Sindh Dr. Ishrat-ul-Ebad Khan. He said the KMDC has reached its present enviable status in a very short time. The number of seats for MBBS has been increased from 100 to 250 similarly the number of BDS seats has been doubled from 50 to 100. Necessary legislation has been done to convert KMDC from college to a university titled the “City University of Medical Sciences.” He said KMDC is the only medical and dental college of our country which is being run and patronized by the Local Metropolitan Corporation where admissions are based on a transparent, accountable and total open merit policy.

← Justice Bhagwandas urges youth to contribute for prosperity of Pakistan
Business community tell the public about the elements involved in kidnappings and extortion: Altaf Hussain →