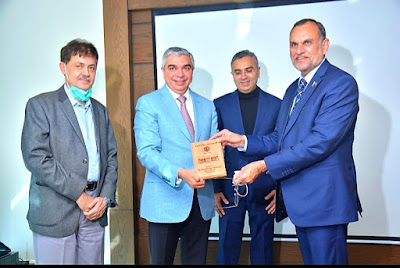 The Federal Minister for Railways, Muhammad Azam Khan Swati, visited the Qasim International Container Terminal (QICT), a major container loading and unloading facility, under the auspices of the Dubai Port World where he was given a detailed presentation there.
The Dubai Port World, commonly called as DP World, is regarded as the largest multinational firm, in terms of footprint, offering its services in the arena of port operations.
The minister expressed the desire for exponentially increasing the volume of freight business in the country and declared it as the prime objective during his tenure. 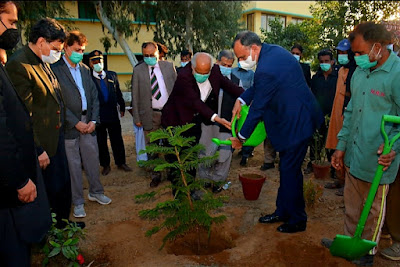 “A vibrant freight service is the major way forward for a progressive and sustained economic growth, he remarked during the presentation.
The CEO Pakistan Railways, Nisar Ahmad Memon, apprised during the presentation that railways was working in full liaison with the DP world and the latter had been offered construction of a container terminal also.
The minister also visited the Pakistan International Bulk Terminal (PIBT), the imported coal unloading facility at Port Qasim, and reviewed a comprehensive presentation there.
“Railways, freight and economy are three interdependent variables connected linearly with each other, he stated at the presentation conclusion. He was presented with mementos at QICT and PIBT.
The two terminals’ visits were followed by the visit of Marshalling Yard Pipri (MYP). The minister was briefed, at length, there by the CEO Railways. He planted a sapling in the outskirts of the yard also.

← Minister vows to double Railways freight volume
Zubair Motiwala for out of turn release of IT refunds to small traders, SMEs →