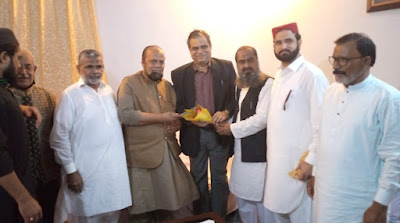 The National Library Association (NLA) organized a reception in the honour of the California-based eminent scholar and orator, Ahsan Rafiq, in Karachi on August 29. The ceremony, attended by more than 25 representatives from different walks of life, was presided over by the NLA Advisor, Syed Khalid Mahmood.
In his welcome address, the NLA President, Muzaffar Ali Shah, paid glowing to Ahsan Rafiq for his meritorious services in motivating people with his inspirational speeches and lectures.
Its our proud privilege to host such a great scholar this evening having proved his mettle as an orator and broadcaster for the last many years. He has come to Karachi, his home city, on a brief visit of just a couple of weeks and we are honoured with his presence between us, the NLA President complimented. 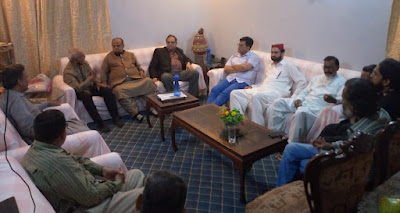 Living upto his big reputation, Ahsan Rafiq, the chief guest of the evening, delivered yet another wonderfully worded speech in which he described the legendary orator and leader, Moulana Mohammad Ali Jahuar, as his role model.

Having entered into debates from my school life, I established myself as a regular orator and broadcaster while pursuing my career as a pharmacist. I also taught English language at an institute in Federal-B-Area in evenings. Later I moved to California, USA, and took up the teaching assignment in public speaking after completing Masters in Business Administration (MBA) there, he shared.
I am also a motivational speaker. I derive huge satisfaction at being gold medalist in various speeches and debating competitions over the years. I have won more than 20 gold medals besides numerous trophies in my career. Winning debating contests at prestigious institutions are high points of my life, he reckoned. 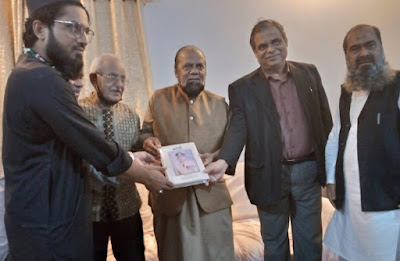 Syed Khalid Mahmood, in his presidential address, while commending Ahsan Rafiq on his accomplishments, urged him to play his role in building library culture in Pakistan.

You certainly are an icon in the field of debating and you are gifted with the elusive quality of motivating people with your speeches and talks. Having lived in the United States for a long time and worked in the education sector you are well versed with the library system there. You are very kindly requested to take some interest in helping build the same kind of library culture in Pakistan, the NLA Advisor stated.
Ahsan Rafiq promptly agreed to join hands with the NLA in achieving mutual objective of development of library culture in Pakistan and he promised to sit down with the NLA officials for a brainstorming before returning to USA next month.
The NLA Secretary, Anwar Hussain, presented the vote of thanks in which he expressed his gratitude to all the guests to have made it to the ceremony at a very short notice. The meeting was followed by a sumptuous dinner.

← Radio for a brighter Pakistan
A question of value-adding literacy →