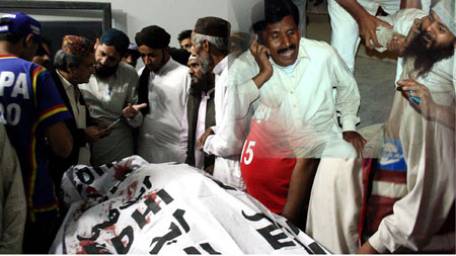 At least nine people were killed and 10 others injured as gunmen fired on a shrine in the city on Sunday. Police and rescue sources said some six armed men on motorcycles came to the shrine of Meharban Ali Shah alias Jalali Baba in Baldia Town and fired on the people, who were attending a mehfil-e-sama. The attackers, who were wearing crash helmets, fled after the shooting.

The bodies and injured were shifted to the Civil Hospital Karachi (CHK). The deceased included a two-year-old girl. The injured included a women, said hospital sources, which added that the condition of three of the injured was critical. Police said the attackers also hurled a grenade before firing at the people with automatic weapons. They said the shrine belonged to a retired DSP. Heavy contingent of police and Rangers reached the shrine and cordoned off nearby areas after the attack. No group claimed responsibility for the attack. A case has been registered against the unidentified attackers and police have started investigation. Three persons were killed and several others injured in a fresh spate of violence in different areas of the city on Saturday. Security personnel also arrested 23 suspects, including two foreigners, during a search operation and recovered weapons and drugs. (Daily Times)