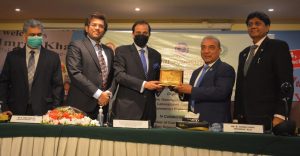 In response to a suggestion by Chairman Businessmen Group (BMG) Zubair Motiwala, the Advisor to Chief Minister Sindh on Law, Environment, Climate Change and Coastal Development Barrister Murtaza Wahab directed the Secretary Environment to immediately notify a liaison/ consultative committee so that the Sindh government in consultation with Karachi Chamber could thoroughly review and finalize legislations for Solid Waste Management.
Speaking at a national symposium on Integrated Solid Waste Management organized by KCCI in collaboration with Society of Economic Geologists and Mineral Technologies (SEGMITE) on Wednesday, Murtaza Wahab assured that all recommendations given by Karachi Chamber for improving the solid waste management system and for ensuring cleanliness all over the city will certainly be taken into consideration.
Chairman BMG Zubair Motiwala (Via Zoom Facility), Secretary Environment Muhammad Aslam Ghauri, President KCCI M. Shariq Vohra, Senior Vice President KCCI Saqib Goodluck, Vice President KCCI Shamsul Islam Khan, Convener SEGMITE Dr. Viqar Husain, DG PCSIR Dr. Shahnaz Perveen, KCCI Managing Committee Members and others attended the symposium.
Murtaza Wahab stressed that everybody talks about their rights but nobody talks about their duties which was the major reason for the cleanliness problems being suffered by Karachi. It is the right of citizens to have a neat and clean environment but similarly, it is also the duty of the citizens to play their part in this regard by strictly refraining from dumping the garbage on the streets which must only be placed at designated garbage bins, not outside their houses or shops, he added.
He urged the masses to use bags made of cloth or paper for their shopping activities instead of using non-biodegradable plastic bags which clog the drainage system, create many cleanliness issues and health hazards.
CMs Advisor appreciated the effort made by KCCI to raise awareness amongst the masses about solid waste management which was the need of the hour. Such symposiums are undoubtedly a step in the right direction as these help the masses differentiate between what is right and what is wrong. Hence, the Sindh government will fully support all such initiatives taken by KCCI, he added.
Chairman BMG & Former President KCCI M. Zubair Motiwala, while appreciating the initiative taken by KCCI in collaboration with SIGMITE particularly the efforts made by Vice President Shamsul Islam to make the symposium successful, stated that the Karachi Chamber would always support all such initiatives and was ready to go hands-in-hands with the Sindh government to make Karachi a neat and clean city.
Underscoring the need to amend relevant laws, Zubair Motiwala requested CMs Advisor to form a consultative committee comprising representatives from Sindh government and the Karachi Chamber so that they could jointly discuss relevant laws, suggests necessary amendments and devise effective plan of action for the betterment of Karachi.
Speaking on the occasion, President KCCI Shariq Vohra pointed out that solid waste management has become such an important subject which was being discussed almost every day not only at KCCI but everyone else was also talking about it and the situation continues calls for practical steps. Although the Sindh government was trying hard to deal with the situation and some applaudable steps have also been taken but a lot more still needs to be done to make Karachi neat and clean. The strategies and plan of action for solid waste management must be devised after carrying out extensive research and thoroughly studying the ground realities otherwise, all the efforts being made will be wasted.
He said that 87 percent of the garbage coming out of Karachi was recyclable but instead of following the international practices right from the very beginning, this garbage is thrown on streets where it was largely being disintegrated by the scavengers who take out the recyclable stuff and throw the rest of the garbage anywhere which creates a lot of problems and makes the city dirtier. We have to adopt international models and recycling techniques as this valuable recycle stuff being wasted in Pakistan was being used globally for manufacturing automobile parts and toys etc., he said, adding that solid waste can be used as an effective source for the development of economy and the businesses.
President KCCI also stressed that the citizens must also act responsibly as it was not the responsibility of the government alone to ensure cleanliness and every citizen of Karachi will have to play an equal role to create a better and clean society.

← Heart, soul and spirit of Karachi
KCCI upset over stoppage of payments by NSC →