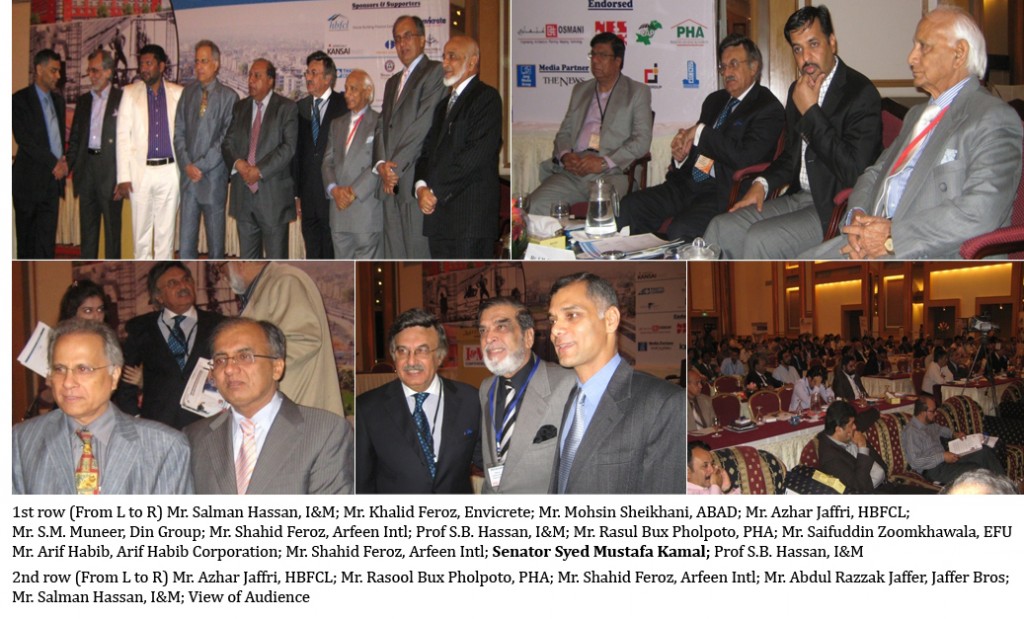 The existing housing crisis was discussed in the detail by a variety of stakeholders of Pakistan’s Housing Construction Industry, at a conference recently held in Karachi Participants from Association of Builders and Developers, House Building Finance Company Ltd, Pakistan Housing Authority, Grand Leisure Corporation, Lyari Development Authority, NESPAK, Institute of Architects Pakistan, and other organizations  attended a 1-day conference organized by I&M Conferences at Marriott Hotel in Karachi.

The objective of the conference was to highlight the importance of the housing construction sector for the development of the national economy and for a creating productive, safe and modern society in Pakistan.

Dr. Kaiser Bengali, the noted development economist, and former Advisor to the Sindh Governement, said that the new housing schemes will not meet the needs of the struggling low-income population of the country.  According to Dr. Kaiser, the best way to address the housing shortage is to make more serviced land available to the homeless, and the assist them build their own homes.  He said that the existing housing stock for upper-middle class group was unoccupied and that new housing schemes were being driven by the motivations and objectives of speculators.

Dr. Bengali spoke on a panel with the title, “New Housing Schemes and Planned Cities.  Following him, Dr. Tasneem Siddiqui, the CEO of the non-profit agency Saiban, said that that the best way to achieve housing for the low-income is to allow them to build home incrementally on a self-help basis.

Former City Nazim, Karachi, Senator Syed Mustafa Kamal, expressed his concern that due to mass migration from rural areas to cities, there would be an increase in katchi abadis in all cities of Pakistan, and that the government must face this reality and formulate a workable policy for housing that safe-guards the lives and properties of urban residents.  Katchi abadis are centers for crime, for illegal water connections, for illegal electricity through kunda system, and for the spread of illness and disease due to open sewage.

The topic of housing finance was handled by Mr. Azhar Jaffri, MD, House Building Finance Company Ltd, and bankers from Meezan Bank Ltd and Bank Islami.  Mr. S.M. Muneer, the President of of Pakistan India Chamber of Commerce and Industry, said that housing finance in India is provided to the public by five different groups of institutions namely:  Scheduled Commercial Banks, Scheduled Co-operative Banks, Agricultural and Rural Development Banks,  Housing Finance Companies, State Level Apex Cooperative Housing and Finance Societies. The Housing finance sector in India has experienced unprecedented change in its structure from its formulation stage.  Indian Housing finance has far moved from the stages of being a solely government provided service during the 1970’s to a very competitive sector with more than 45 housing finance entities providing housing loans worth more than Indian Rs 781 billion to home buyers across India.

Mr. Abrar Ameen, Chairman, Association of Mortgage Bankers of Pakistan informed the gathering that his association was working with the Housing and Infrastructure Department of State Bank of Pakistan to create developer funds for housing.  He said that commercial banks were almost non-existent in mortgage financing, and that only 5000 units were financed by commercial banks in all of Pakistan in 2011.

Prof S. B. Hassan of I&M, Executive Committee Member of APNS, thanked the participants for their participation.  He reminded the audience that March 21 was celebrated as World Poetry Day, and suggested that March 22 should be designated in Pakistan as Pakistan Housing Day.  The conference began with recitation of Holy Quran and National Anthem, to observe and honour Pakistan Day on March 23.