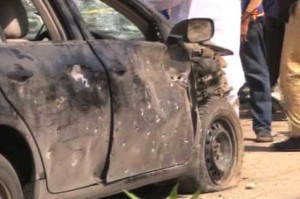 At least four people have been killed and more several others injured in a suicide blast targeting a government vehicle in Defence area of Karachi, Dunya News reported on Friday.

The incident took place in Gizri area of Defence Phase 4.

Several nearby vehicles and buildings were damaged due to the huge blast.

The injured were shifted to Jinnah Hospital where some of them are said to be in critical condition.

Police and Rangers personnel have arrived at the scene and cordoned off the area.