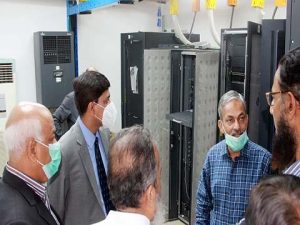 Administrator Karachi Laeeq Ahmed on Friday said that Karachi Metropolitan Corporations revenue would be increased after making municipality charges collection better and the citizens would be provided more facilities. Printed MUCT bill should be sent to the people every month as three-month was a burden for them. The use of Information and Technology would help in making betterment in the procedure, the Administrator passed these remarks while visiting Municipality Utility Charges Tax (MCUT) office here at KMC building. Concerned officials were also present on the occasion. The Administrator said that a mechanism should be devised so as to boost the recovery as well as the facilitate the citizens in the tax collection. He said that it was very important to keep revenue generating resources intact for stabilizing the KMC financially. Ahmed said that the KMC provides facilities to the people in health, education sectors while fire brigade also save human lives and properties in inferno incidents. The KMC also provide municipal facilities, recreational activities at parks. He said that payment of MUCT bills on time paves the way for domestic and industrial consumers to play their part for betterment of the city. He said that local bodies are in directly contact with the people and it is their prime responsibility to resolve issues being faced by the masses. The Administrator was of the view that all departmental heads of KMC were directed to achieve the revenue target so that the financial stability could be brought in the institution. He said that MUCT is main component for KMCs revenue and it is being upgraded as per modern ways. While vesting payroll department, Ahmed said that printing of salaries, pensions and other bills should be done on time and record be preserved. He directed that payroll system should be upgraded for facilitation of current and former employees. All concerned officials should perform the given task effectively, he said.

← Zubair Motiwala for out of turn release of IT refunds to small traders, SMEs
POST COVID SCENARIO: Tolga Ucak advises KCCI to send business delegation to Turkey after April →