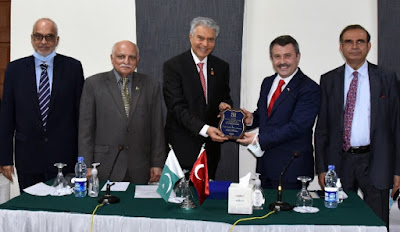 By Abdul Qadir Qureshi
(Pakistan News & Features Services)
The English Speaking Union of Pakistan (ESUP), headed by Aziz Memon, organized a hybrid meeting for the first time on March 11 as besides hosting a function at the Beach Luxury Hotel in Karachi, it also allowed participation via Zoom.
It was also for the first meeting of the ESUP after their President, Aziz Memon, had been elected as Vice President of the English Speaking Union (ESU) International for a term of next couple of years.
Ihsan Mustafa Yurdakul, Ambassador of the Republic of Turkey, who was the guest speaker, joined the meeting from Islamabad and talked at length on the foreign policy of Turkey and Turkey-Pakistan bilateral relations.
Our foreign policy is based on respect for international law, helping ease regional conflicts, extending cooperation with other countries and taking up of positive initiatives and partnering with key countries for the welfare of countries such as Somalia or Afghanistan. Turkey makes its contributions relevant in the European Union as a strategic partner, he observed.
Unity in diversity will certainly go a long way in harmonious societies, and Turkey contributes constructively for dealing with multiple challenges while upholding common values and cooperation. We shall never lose our optimism, he added.
It is more like a bond than a relationship. For friendships and relationships, you have a distance over which you can relate. But here we have a unique bond of which the most effective happens to be our people-to-people relations, the Ambassador remarked while referring to bilateral relations between Turkey and Pakistan.
We have $900 million worth of trade annually and we still have more room to increase as our investors and entrepreneurs want to do more business with Pakistan. There is potential for investment of over a billion in Pakistan between the next 20 to 25 years in things such as hygiene products and construction material, he reckoned.
Culture and tourism is like fertilizer for our bond. Our television dramas are a huge success in Pakistan. Their ratings here are much higher than in Turkey. An example of this is the serial Ertugrul. We share a Muslim history that we are proud of. All these things are good for bringing us together, Ihsan Mustafa Yurdakul highlighted.
Pakistan is definitely a beautiful and unique country, which people should be visiting. But tourism is not an easy thing. It needs the whole nations resolve. There needs to be a culture of education, a culture of service for which you need to train hundreds of people in the hospitality sector. Otherwise, it should not be difficult for Pakistan to get known as a tourist-welcoming nation as Pakistanis are welcoming and friendly by nature, the Ambassador explained.
Meanwhile Aziz Memon, President, ESUP, presented a plaque to Tolga Ucak, Consul General of Turkey, on behalf of Ambassador Ihsan Mustafa Yurdakul. The ESUP Treasurer, Husain Basrai and Secretary General, Majyd Aziz were also present on the occasion alongwith Moin M. Fudda, member NCEC.