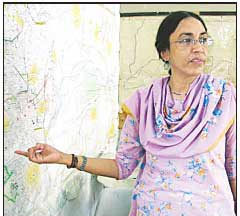 Prominent social activist, educationist and director of Orangi Pilot Project (OPP), Parveen Rehman was shot dead near Banaras flyover within the jurisdiction of Pirabad police station on Wednesday. According to police, gunmen riding motorcycles shot her while she had been traveling from Orangi with her driver. She was shifted to Abbasi Shaheed Hospital (ASH) where doctors pronounced her dead. The motive behind her murder remains unclear but the incident appears to be a case of targeted killing, say officials investigating the case.

The fifty-year-old had been serving in the Visual Studies department at the University of Karachi. In addition to that, she was the director of Orangi Pilot Project and had been instrumental in devising ways to deal with sanitation problems. Rehman headed a research centre in Orangi, a section of Karachi and also taught students of Architecture College. Governor Sindh Dr Ishrat-ul-Ebad took a notice of the killing and termed it an inhuman act. Dr Ebad also directed the law enforcement agencies to acquire and examine the footages of CCTV cameras installed at all entry and exit points close to the crime scene. The governor also directed IG Sindh Ghulam Shabbir Shaikh to submit the report of the incident.

Meanwhile, MQM chief Altaf Hussain condemned the murder and said tercrorists were targeting important personalities in order to achieve their nefarious designs. He said Rehman was a highly capable woman and her public services could never be forgotten. He demanded of President Asif Ali Zardari, Prime Minister Raja Pervaiz Ashraf, Interior Minister Rehman Malik, Governor Sindh Dr Ishratul Ebad and Chief Minister Sindh Syed Qaim Ali Shah to take immediate notice of the brutal killing of Ms Rehman. He said that the terrorists responsible for her killing should be brought to justice. Colleagues of the deceased say she will be remembered as a committed social worker as well as a brilliant teacher.  (DT)

← Governor of Sindh always given a sense of protection to builders: Anwar Gagai
Prof Sibt-e-Jaffar shot dead in Liaquatabad →