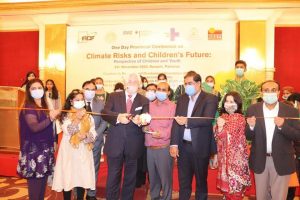 The discussion was held in a first of its kind conference on climate change risks to the future of children in Pakistan, organized at a hotel in Karachi on Tuesday. The conference was organized by the Research and Development Foundation (RDF) in collaboration with a German International Child Focused Development Organization Kindernothilfe (KNH), co-financed by the German Federal Ministry for Economic Cooperation and Development (BMZ) and Government of Sindh.

The conference attracted participation of more than 150 children and youth, concerned government officials and civil society representatives who opined that childrens rights of dignified access to safe water, sanitation, quality education, food, health, socialization, participation and association were affected in any disaster. They called for strengthening disaster management and adaptation mechanisms in the province.

Murtaza Wahab, Advisor to Chief Minister of Sindh on Law, was the chief guest. While addressing to the audience, he said awareness regarding climate change was very crucial for mitigating its affects.He appreciated the strategies of RDF to engage women, children and youth from Tharparker, Khipro and far-flung areas of seven districts of Sindh who were interacting with German experts and German Consulate.

He encouraged the audience not to rely on politicians and government only but to take the responsibility themselves to play their role in the fight against climate change. He also emphasized the audience to take the serious precautions of COVID-19 with the same spirit as they were taking for climate change. Counsel General of Federal Republic of Germany in Karachi, His Excellency Mr. Holger Ziegler recognized the efforts of RDF for supporting Pakistan’s government to explore future actions to address climate related challenges from children and youth perspective and he added that there was a dire need for people to recognize the severity of climate change impacts and encouraged children and youth to play an active role in combating climate change.